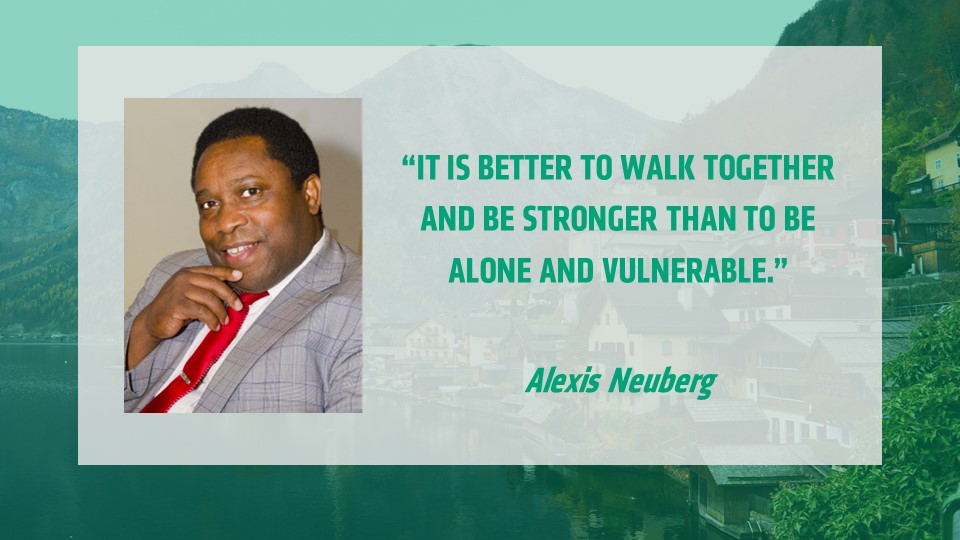 Diaspora voices
May 20, 2021
Alexis Neuberg on diaspora networks & the role of diaspora media

After working together on our recent regional webinar, looking at the 360˚ potential of diaspora and mentoring for Africa, we took the opportunity to have a conversation with ADEPT President and Founder of Radio Afrika TV, Alexis Neuberg. Naomi, one of our current Diaspora Youth Interns, picked Alexis’ brains on the importance of media for the African diaspora, as well as his long experience in different associations.

Naomi: Hello Alexis, I am very happy to meet you. Your journey is remarkable and as a young person from the African diaspora, I hope to learn a lot!

You founded Radio Afrika TV, which is a media platform based in Austria that provides information about Africa. Why was it important for you to create a media platform specifically for the African diaspora and how do you think the media affects the identity of the diaspora?

Alexis: I came to Austria to study communication and journalism and my first observation was that although Africa was present in all the media, it was only in the three Cs: crisis, conflict and catastrophe. Furthermore, there was a lot of contempt for Africans because we were considered beggars or illiterate. As an African journalist I could not expect the Austrian media to change, but I had to be part of it and make it possible to offer the missing information.

Over time we observed three categories of people: those who took everything as fact and had a very limited image of Africa; those who wanted more information but could not find it; and members of the African diaspora who are not informed about the continent and the positive work of the African diaspora in Austria because of the disdainful portrayal in the media. After this bitter observation, at the end of my studies I decided to use my knowledge and network to work on a response to these challenges by cooperating with the major media platforms in Austria, especially national radio and television. This ensured the credibility, effectiveness and sustainability of the project. In this way we were able to establish ourselves as an institution in Austria.

The platform celebrates its 24th anniversary this year. Reflecting on the last two decades, do you think that the representation of Africa in the German speaking media has changed?

Not at all! Unfortunately, misinformation remains the same because the mentality about Africa has not really changed. This is partly due to the different views on journalism in Europe and Africa. European journalism is based on sensationalism and emotions. As this has not changed, the news on Africa hasn’t changed much in recent decades. This is why it is so important to broadcast news directly from Africa. As the African diaspora, it is up to us to find out how to get our media into Europe. With Radio Afrika TV we hope to set the example in Austria.

Speaking of misinformation, the term “fake news” has gained importance in recent years. How do you manage to deal with fake news in the African diaspora?

It is true that it has become easier to publish false information, especially because via social media. Radio Afrika TV is fighting this with two projects: we are working on a project funded by the European Union on educating teachers, students and parents about the “fake news” circulating on social networks that can affect the integration of migrants and encourage xenophobia and racism. For example, it is very easy to spread a story that an African has been caught selling drugs when in fact he or she has simply undergone a routine check.

The second project is to foster media networking in Africa and cooperation with our partner agencies on the continent to create a platform of African media that can provide us with authentic information.

Beyond that, we also share our information with Austrian media such as the national channel or print media. We respond to the north-south but also the south-south news-demand. At our level, here in Europe, we transform the information we receive from our partners on the continent for the German-speaking public, which we hope to extend to Switzerland.

Apart from Radio Afrika TV, you are also the president of the Africa-Europe Diaspora Development Platform – ADEPT – a network for African diaspora organisations in Europe. Why do you think it is important to have this kind of organisation and what are the advantages of being a member?

At ADEPT, we are aware that members of the African diaspora are doing all they can to help their respective countries of origin. However, we are convinced that there is more power in unity. Bringing organisations together is about empowering each other and achieving more effective change in the way development is conceived in Africa. It is also about helping fledgling associations which already have make valuable contributions to enhance their work through professionalisation that will allow them to access more opportunities. Finally, the network itself and the opportunity to learn from each other are of course also important benefits. It is better to walk together and be stronger than to be alone and vulnerable!

Based on your experience with ADEPT and Radio Afrika TV, what advice would you give to organisations like mine that are new to development work?

There are two or three mistakes that I often see. One is the dishonest creation of organisations. Unfortunately, there are many associations in Europe that are focused on development for financial reasons. Instead of creating an association, I simply advise these people to create companies.

The second mistake is not knowing how NGOs work in Europe and not doing the necessary training. Although these are African organisations, we cannot ignore the obligations established by our host countries for running an organisation. If we do not follow the European systems, we cannot hope to obtain funding or collaborations.

The last advice is to not do things in an emotional way, but to be able to understand and accept criticism.

At ADEPT we try to help organisations to avoid these mistakes. Personally, I also hope to see a greater investment by the youth in the coming years. I believe that in the next thirty years, this generation will be able to turn things around.

I think young people are already very active. Of course, there are also many of us – especially those who are second generation immigrants – who do not consider themselves part of the diaspora. But for many it is becoming more and more important to participate in the development of their countries of heritage

Of course! In particular, young people are beginning to discover some of the problems that the older generation has faced for a longer period of time, such as systemic racism, police profiling etc. Through fighting these battles the younger generation starts to get more interested in their country of heritage.

On our side we have done what is necessary to lay the groundwork for this generation to have a head start. We have been trying for 30 years to get minorities into visible positions. 30 years ago this was of course much more difficult and the language barrier was greater. Now, fortunately, things are changing and young people don’t have the same language barriers and take on more opportunities than we could.  This really gives me hope that the new generation can contribute to an impactful change in the development of Africa, especially if young people in the diaspora and those on the continent work together in this direction.

To learn more about Radio Afrika TV and ADEPT, visit their websites.