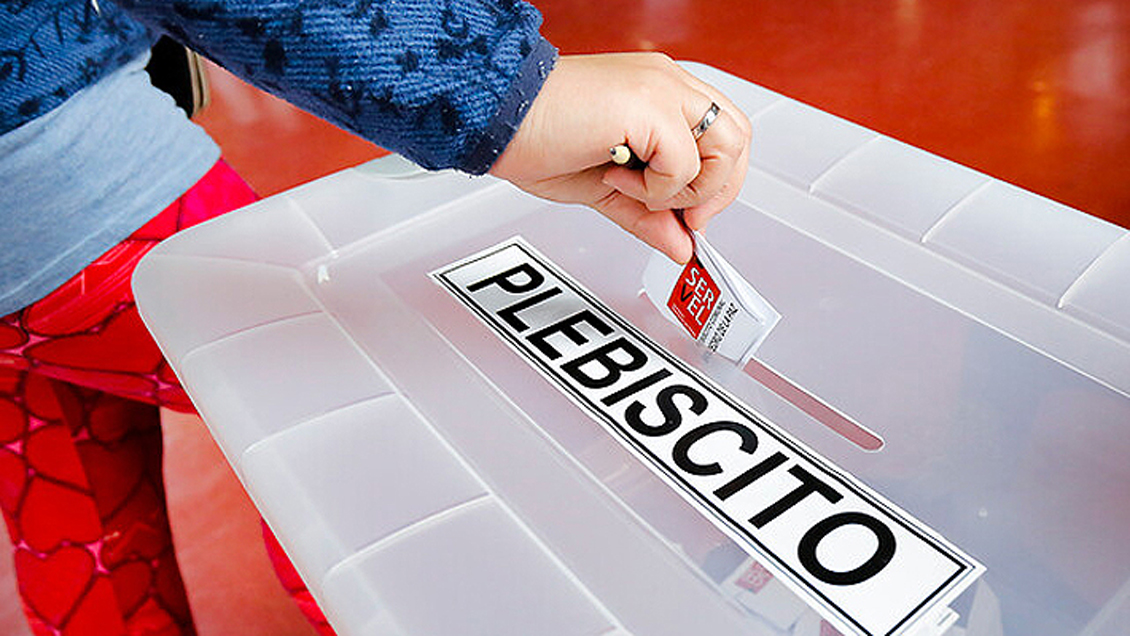 On Sunday 25 October 2020, Chileans will vote in an historic referendum on whether or not to rewrite the country’s constitution, which was written in 1980 during the Pinochet era. Politicians agreed to the referendum as a response to the estadillo social, or ‘social explosion’, of protests and a month of unrest in October 2019 against the state system and growing inequality in Chile. The plebiscite was supposed to take place in April 2020. However, it was postponed because of risks posed by the Covid-19 pandemic. On 25 October, Chileans will be asked both whether they want a constitution and, if so, whether it should be drafted by a constitutional convention (members elected directly for this convention), or a mixed constitutional convention (half currently-sitting members of Parliament and half directly-elected citizens).

Not only is the referendum a historic one for its context and potential impact, but it is also the first time that Chileans residing overseas (chilenos en el extranjero) will be able to vote in a referendum, having been granted the right to vote in Presidential elections and national plebiscites in 2017. Although Chile’s emigrant population is only 3.4% of its total (approximately 650k in 2019), the top five countries of destination are geographically spread (Argentina, US, Spain, Australia, Canada) making it a diverse group of voters. Europe is home to 23% of those Chileans overseas, one of whom is Agustín, EUDiF’s Associate Project Officer in the Capacity Development Team. Agustin started as a Diaspora Youth Intern and has been living in the diaspora for 2 years since he left Chile to pursue graduate studies in the UK.

Q: Agustín, just over a month ago it was Chile’s Fiestas Patrias (Homeland Holidays) and you told me you feel most homesick during national festivities, but also that it was a moment to remember that you are an ambassador of your Chile, able to share your culture abroad. In contrast to the holiday, how does being in the diaspora at such a pivotal moment in Chile’s political history feel?

Agustín: It has been a journey full of mixed feelings. It was tough to be far away when the protests started in October last year – you feel like a mere spectator of such a crucial moment for the history of your homeland. For a while, with so much going on at home, I felt a bit like a foreigner myself, feeling on some level that I was not allowed to have an opinion if I was not there.

Then again, experiencing this historical moment from abroad gives you a different perspective. Unfortunately, due to the significance and strong feelings driving the movement last year, the discussion in Chile has been strongly polarised, sometimes in a damaging way for democracy. I think that people find it more difficult to engage in constructive, nuanced dialogue when committing to one camp or another – a reality experienced today all over the world. From outside Chile, I have the opportunity to watch what is happening from the side, no less committed or interested, but perhaps with less of that blinding passion that characterises us Latinos. That passion is important to drive social change but comes with risks and creates binaries when we talk about politics.

Living overseas do you feel more or less connected to Chile as a citizen?

As I have to make an active effort to remain connected, sometimes I feel I am even more engaged with the national situation than when I was living in Chile. Once protests started in October and the debate on the new constitution resurfaced I felt strongly called to keep myself informed: to read more, to listen and to talk about the current situation. I was glad to see how the international media coverage of the estallido social was quite comprehensive and unbiased, compared to Chilean media.

Moreover, being a diasporan during these times, gives you a unique opportunity to represent your country in the international debate. People become interested on what is happening in your country and they ask you about it. Because of this I feel it is a civic duty to be well-informed and connected to Chile as a citizen. Non-Chileans count on diasporans like me to explain the political situation and give an insider-perspective.

Sounds like that could be pretty exhausting! Do you also talk to family and friends about voting, and has this changed since you moved abroad?

Since the start of the estallido social, the protests and the new constitution has been an everyday topic amongst friends and family. I have always been interested in reading about and discussing politics and since leaving Chile, that interest has only grown as a way of maintaining my connection with home. That said, talking about the subject is delicate, as there are very different positions among my friends and family.

Are you part of the Chilean community in Belgium?

I am indeed! In fact, this referendum encouraged some of us to participate and assist actively in the electoral process. As in any election, political parties and social movements call on voters to participate as observers or monitors of the process. This is how we got together with some interested Chileans living here in Belgium to participate as observers. We contacted the political parties in Chile and met with the consul here in Brussels to offer our help – I’m kind of a geek when it comes to elections!

What a great contribution to make to Chile. Can you tell me about the process of registering as an overseas voter, and what you are expecting on Sunday?

It is pretty easy actually and the same process for all voters. Shortly before you turn 18, you’re automatically registered in the electoral roll. Once registered, you have the right to vote under that address until you change it yourself. If you change address in Chile or overseas, you update your details on the Electoral Service’s website, a few months before the election. The address update is confirmed by email, and then you can log-in to the website to check where to find your local polling station.

This Sunday, since I will be acting as an election observer, I will arrive very early to the polling station at a local school and stay there throughout the day. It will be interesting to see how the election takes place with the Belgian sanitary measures applied. Everything will be very new to me: first time voting from abroad, first time as an electoral observer, a historical referendum – and all that during a pandemic! 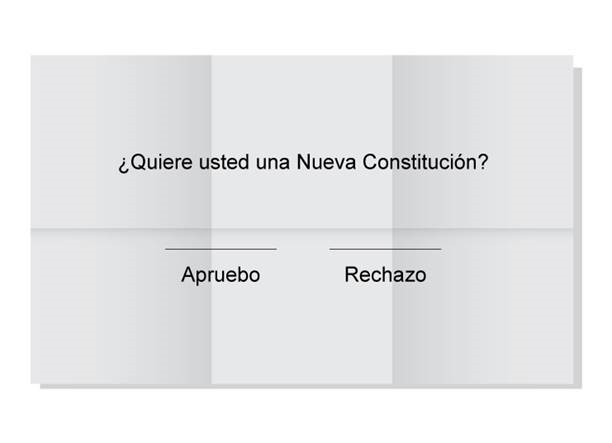 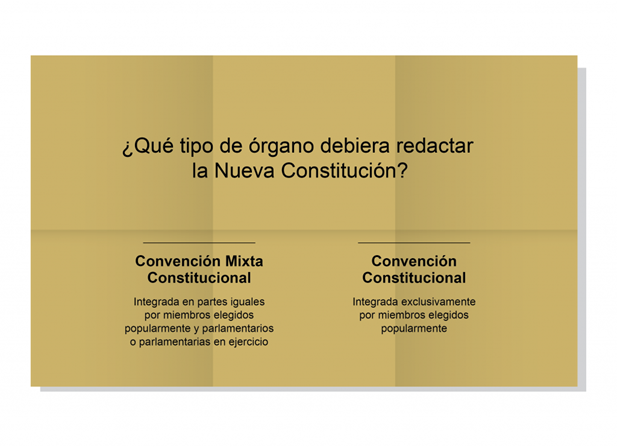 How has Covid-19 affected the referendum?

In many ways! First, the referendum was supposed to be carried out in April. Given the global health situation and the measures implemented there was broad agreement to postpone it until this Sunday. However, as we well know, the pandemic is not close to being over. Although Chile is leaving the first wave of the virus behind and the measures have started to ease, in various parts of the world we are facing a further increase in contagion and the re-establishment of stricter measures. This is proving a challenge for Chileans voting from abroad, since the possibility of actually exercising the right to vote will depend mainly on each country of residence and the local restrictions imposed. Unfortunately, Chile’s Ministry of Foreign Affairs – the institution in charge of matters related to Chileans residing overseas – does not have much power to guarantee the right to vote outside the country’s borders. Analysts are also afraid that voter turnout may be affected due to Covid-19, both in Chile and overseas.

I am not asking how you will vote because that is private, but if the result is a majority ‘yes’, do you think there is a role for the Chilean diaspora in rewriting the constitution?

The writing of a new constitution is an historic opportunity to meet again among all Chileans, regardless of origin, political position, religion or socioeconomic group. So, yes, I believe that the diaspora also has a role to play in the process. Although Chileans residing overseas will not be able to choose the members of the Constitutional Convention, we can still make our voices heard during the referendum itself.

The writing of a new Constitution has the potential to bring a new sense of belonging to the nation, which – based on my experience – could be felt even more strongly while living abroad. Diaspora voices have so much to contribute to this conversation, especially considering our cultural capital we can bring to help fostering dynamic and open-minded societies, thanks to the diverse places we are now based in.

It is clear to me that the Chilean diaspora wants to participate in this unique moment in our country’s history based on the increase of 48% in registrations for overseas voting for this plebiscite. We can all become part of this beautiful process, wherever we are, and I am excited to play my part on a few different levels!

Agustín works on the Capacity Development Lab and Diaspora Professionals 4 Development. Contact him via eu-diaspora@icmpd.org to learn about how to collaborate, or connect with him on LinkedIn.

Chile is included in the second round of EUDiF’s global mapping of diaspora engagement. A country factsheet will be published in November 2020.