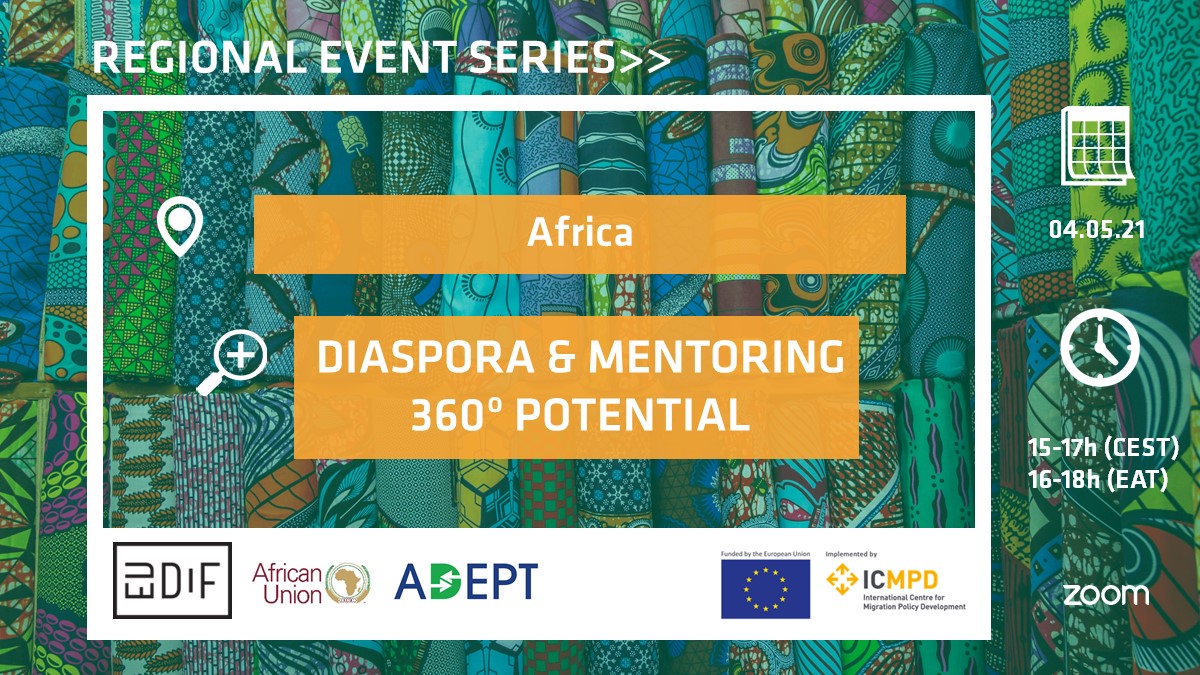 Join the fourth webinar in our regional event series: Tuesday 4 May, 15:00 (CEST). The Africa edition of the event series looks at the 360 potential of diaspora and mentoring. The event is organised in collaboration with the Citizen’s and Diaspora Directorate of the African Union (CIDO) and the Africa-Europe Diaspora Development Platform (ADEPT).

As part of the regional thematic event series taking place from March to May, EUDiF, CIDO and ADEPT have joined forces to organise a webinar on diaspora engagement and Africa, with a specific focus on the 360° potential of diaspora & mentoring. The event will be run in English and French, with interpretation provided during the plenary sessions, and two parallel practice exchanges, one each in English and French.

Once we have set the scene, there we will be two panel discussions to exchange practices. One exchange will take place in French, with the theme ‘mentoring to, from and within the diaspora‘. The second exchange will take place in parallel in English, on ‘instutionalising mentoring‘. Both exchanges will include time for questions from the audience, before we return to plenary and compare the highlights from the separate sessions to make sure no one misses out on the discussions from the other group. Come ready to get involved in the discussion!

We have been delighted by the enthusiasm to take part in this event, which demonstrates just how important a topic mentoring (and entrepreneurship) are in Africa’s diaspora-development ecosystem. We are finalising the list of speakers, but so far are pleased to announce that we will hear from…

Watch this space, the final names will be added soon, as well as some pre-event publications to whet your whistle!

Mentoring has many different forms and is used across sectors. Being involved in mentoring as a mentor or mentee can expand access to resources and information and facilitates mutual learning and community building. It is never a one-way interaction, and each relationship is unique, leading to new perspectives on matters great and small, global and local. At the Africa edition of the regional series, we will explore a few of the different forms ‘mentoring’ can take, looking specifically at mentoring for, by and between diaspora, as well as how mentoring is institutionalised in various ways. Most of the examples are related to mentoring and entrepreneurship, but with lessons applicable in a myriad of other contexts.

This event is the last in a series of five regional thematic events organised in the first half of 2021. For each region we host a public webinar themed according to the trends highlighted by our global mapping. The public event then feeds into a government roundtable that enables peer-to-peer exchange on the theme and other shared regional interests.

This regional series, combined with the diaspora consultations we have organised across Europe, help us scale up the conversations on diaspora-engagement for development in advance of our first forum, which will be open to all those in Europe and our partner regions who are interested in diaspora and development.