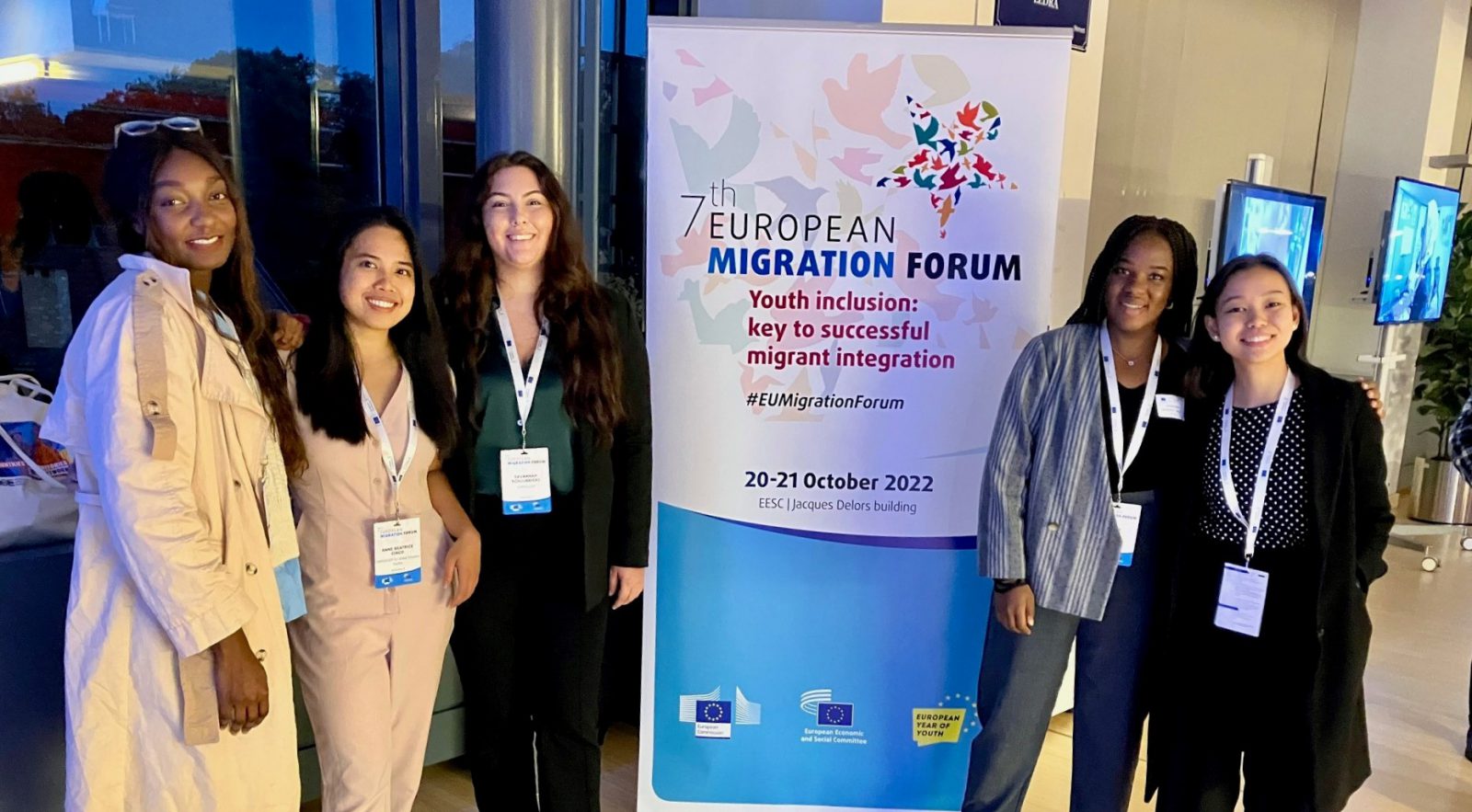 On 20 – 21 October, we attended the 7th European Migration Forum, co-organised by DG HOME and the European Economic and Social Committee. This year’s conference was on the topic of youth inclusion and so, excitingly, EUDiF was represented by five alumnae of the Diaspora Youth Internship.

Over two days we explored the theme “Youth inclusion: the key to successful migrant integration” with around 200 actors from civil society, EU institutions and international organisations amongst others. Taking the idea of “nothing about without” to heart, the organisers invited youth representatives from a wide variety of migrant integration, or integration-adjacent initiatives. Enter the alumni of our Diaspora Youth Internship…

Since the internship kicked off in March 2020, it is with great joy and pride that it has grown into something more than a short professional experience. After our very first intern, Agustín, joined the team permanently at the end of his internship, he became a sort of resident alumnus and go-to mentor for new interns upon arrival. This was the beginning of the interns connecting with each other despite not working together and since then the project has naturally retained a close relationship with former interns. As we see what value this brings on a personal and professional level, we have gradually been formalising the after-internship relationship, resulting in an informal alumni network.

As with any nascent organisation, the network is determining its identity and objectives as it evolves. In May 2022 the alumni re-joined the Future Forum as diaspora youth rapporteurs. This was really the catalyst for conversations about the network and its future – and the genesis of its involvement in the European Migration Forum (EMF).

Platforming youth at the EMF

Five of the alumni, Bea, Gia, Naomi, Oumou and Savannah, joined the EMF. Although some had worked together during their internships, and others had met in person in their respective homes, it was the first time they all met in person, which was wonderful.

The EMF included various dynamic panel discussions with experts and young leaders on topics such as “young migrants as actors of youth inclusion” and “public attitudes towards migrants”, but it also drove interaction between participants in a variety of workshops designed to stimulate discussion and experience sharing.

The youth leaders also participated in a “co-creative space” to generate youth recommendations which were presented to the forum, DG HOME’s Commissioner Johansson and EESC’s President Schweng. It was particularly exciting to see Bea and Naomi take the stage with Elsie, another young leader. Amongst other things, they called for sustainable participatory and representative mechanisms; ratification of the ILO’s Violence and Harassment Convention (C.190);  skills and qualification recognition to reduce barriers to education and employment; greater mental health support; and an intersectional, inclusive approach to policy making and implementation.

On the first day of the EMF, Mialy Dermish of the SIRIUS Policy Network on Migrant Education brought the concept of “asset framing” to the fore, questioning how we can aspire to change public narratives on migration when so much of the language in policy making is around challenges, barriers and issues. This simple but powerful thought permeated the rest of the conference, inspiring workshop groups to adapt their language and triggering conversations between the EUDiF team and alumnae.

Whilst we had not used the phrase before at EUDiF, it certainly chimed a chord! In fact, asset-framing is the core tenet of the facility: the transnational human, social and financial capital of diaspora are major assets for development, ergo engaging diaspora presents great potential for sustainable development at local, national, regional and global level.

Nowhere are the assets of diaspora engagement more clear than in our youth alumni, whose critical thinking, active engagement and commitment ensure the project and the wider community move forward. This was why it was so powerful that the EMF organisers invited a wide range of young leaders with migration background, including the EUDiF alumni, to take part in the discussions on youth inclusion. The young leaders invigorated the discussions with hard truths, practical experience and boundless energy and we can be sure that they will not wait timidly for results.

As EUDiF evolves, so too will the role of the alumni in our work, but we remain convinced that the active involvement of self-identifying young diasporans in the facility is one of our greatest assets, and we will endeavour to live up to their expectations.

Related news
News
Diaspora Youth Rapporteurs at the Future Forum
With the second edition of the Future Forum less than two weeks away, we are excited to share more about...
Read more
Diaspora voices
Oumou Diallo on the potential of diaspora youth mentoring to catalyse the European Year of Youth
The advent of the European Year of Youth and Africa-Europe Week opening with Youth Day, inspired Oumou Diallo, our Research and...
Read more
Diaspora voices • Asia
Thoughts from abroad: Philippines’ 123rd year of independence from Spain
To mark the Philippines' 123rd year of independence, Gia took the time to reflect on what it’s like to be a Filipina student in France in 2021 and contrast it with the experiences of Filipino revolutionaries who lived in Europe as students in the 1800s.
Read more