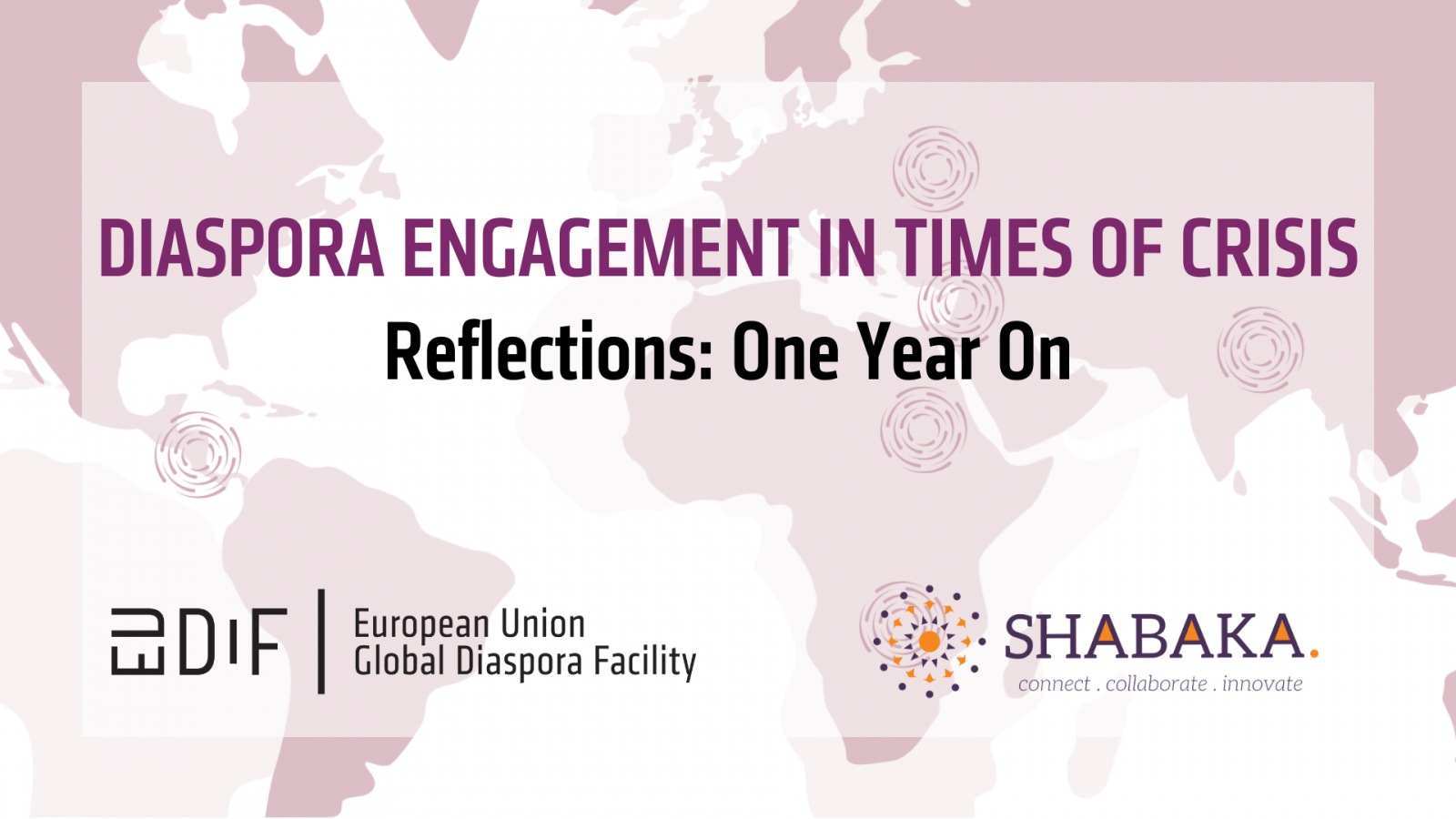 As we mark a year since publishing our report “Diaspora engagement in times of crisis” (Shabaka, 2021), we reflect on how the ongoing or renewed crises in the countries we studied – Lebanon, Nicaragua, Sudan, and Ukraine – have evolved and their implications for diaspora humanitarianism…

One of the report’s main findings was that social, economic, political, and historical factors were more critical in shaping the modalities of diaspora humanitarian response than the type of emergency. Thus, diaspora-led initiatives cannot be isolated from the local context of the country of origin. Against this backdrop, we reflect on how existing patterns of diaspora humanitarianism have been maintained, adapted, or challenged in the past 12 months in four of the countries studied.

Almost two years following the devastating 2020 Beirut explosion, widespread protests against corruption and governance failures remain rampant in Lebanon. Lebanon continues to be afflicted by compounded and overlapping crises: a severe economic and financial crisis, the COVID-19 pandemic, and, most recently, a food security crisis resulting from the Russian invasion of Ukraine. According to the World Bank, Lebanon’s economy contracted by 58.1 percent between 2019 and 2021 and is projected to contract further by 6.5 percent in 2022, making this among the worst economic crises the world has seen. The economic and financial crises have had negative spillovers into an already vulnerable healthcare sector, leading to ongoing shortages in medicines and medical supplies. Meanwhile, the war in Ukraine has further exacerbated deprivation, inequality, and food insecurity, leaving 74 percent of the population in poverty. With deteriorating economic conditions and political instability, the recent elections have created a political drive to address existing issues – a space the Lebanese diaspora has watched closely.

Extensive mobilisation campaigns were implemented to encourage the Lebanese diaspora to vote in the recent election, which led to more than 130,000 Lebanese diaspora members voting in 58 countries. Besides their recent political participation, the Lebanese diaspora has been a critical humanitarian actor throughout history, especially as other actors fall short in responding to Lebanon’s ongoing crises. Remittances remain a crucial lifeline for families in Lebanon, now making up more than 54 percent of the country’s gross domestic product. In response to heightened mistrust in public institutions, the Lebanese diaspora has sought ways to digitise and regenerate the country’s financial sector for long-term development (for example, Purpl). Besides remittances, the case study identified other patterns of humanitarianism, many of which are still observed today: the Lebanese diaspora across the world continues to donate and send medical supplies and medicines in response to shortages, and young women entrepreneurs are paving the way for diaspora-led crowdfunding in creative industries. Despite limited structures for diaspora humanitarianism in Lebanon, the Arab Brazilian Chamber of Commerce (CCAB) in Brazil has responded to the renewed interest among the Lebanese diaspora by encouraging dialogue and advocating for the ratification of the Mercosur-Lebanon agreement to help Lebanon overcome its crises.

On the fourth anniversary of the largest demonstrations in Nicaragua’s recent history, which resulted in hundreds of deaths, injuries, and detentions at the hands of police and paramilitaries, the country remains afflicted by overlapping crises and a deteriorating humanitarian situation. Despite international censure, the Ortega regime continues to rule with a heavy hand, intimidating and persecuting political opponents, censoring media outlets, prohibiting demonstrations, restricting foreign ties, and increasing military presence throughout the country. Most recently, the government has intensified its crackdown on civil society by revoking the legal registration of more than 400 NGOs and withdrawing from the Organization of American States (OAS). In this context, more than 150,000 Nicaraguans have sought refuge and asylum in Costa Rica as of February 2022. However, the number of displaced Nicaraguans is expected to be higher than the reported figures.

Though the arbitrary cancellation of NGOs active in Nicaragua intends to eliminate any social and political vision that differs from Ortega’s regime, it also has severe implications for diaspora engagement during the crisis. In response to the Law for the Regulation of Foreign Agents, which heavily restricts remittances, the Nicaraguan diaspora primarily engaged with NGOs and local partners for humanitarian support. By shutting down NGOs, the government is further limiting the formal channels through which the diaspora can act as a lifeline in Nicaragua – a concern already foreseen in our case study.

Despite setbacks, the Nicaraguan diaspora perseveres: women journalists are using digital media to report on the crisis, and SOS Nicaragua continues to be an invaluable source of humanitarian support to civilians back home and those seeking protection in Costa Rica. Many young exiles attend universities in host countries, where they are developing their capacities to reclaim political and advocacy spaces in Nicaragua. Ultimately, the diaspora remains key to challenging Ortega’s authoritarian regime.

Sudan has historically faced numerous and complex challenges: persistent political instability, ongoing conflict and violence, susceptibility to natural disasters, large-scale displacement, high food insecurity, and an escalating economic crisis. Shortly after publishing the original report, the situation in Sudan took a turn for the worse. Following the removal of Omar al-Bashir three years ago, Sudan’s democratic transition was intercepted by a military coup d’état led by General Abdel Fattah al-Burhanz on 25 October 2021. This has led to widespread, weekly anti-military demonstrations, often met with military violence, for the past eight months. The military coup further exacerbated Sudan’s economic crisis, triggering foreign assistance cuts, rising prices and taxes, and political blockades. The suspension of international funding and a subsequent reduction in subsidies has caused severe electricity and fuel shortages, leading to a sharp decline in living conditions. Through May and June, Sudan witnessed ongoing violence in the western region of Darfur, which has driven more than 84,000 people from their homes in June alone. How the situation will evolve remains to be seen, but several international organisations have warned about the dire humanitarian effects to anticipate in the second half of 2022. An estimated 30 percent of the population – almost 2 million more people since late 2020 – will need humanitarian assistance and protection.

At the time of writing our report, we recognised that lifting international sanctions and removing Sudan from the list of state sponsors of terrorism offered significant opportunities to encourage financial transfers from abroad. Besides being detrimental to those living in Sudan, the military coup – and subsequent international sanctions – may pose considerable challenges to diaspora engagement, including damaged trust relations and the deterrence of diaspora activism.

However, this does not mean that the diaspora has been inactive. The Sudanese diaspora organised protests across the United States (for example, in Washington DC in June 2021 and Minnesota in November 2021) in solidarity with those back home. Besides organising solidarity events and watching the developments of the protests in Sudan closely, the diaspora has also mobilised moral and financial support for protesters back home through support groups on social media.

On 24 February 2022, Russia launched a full-scale military invasion accompanied by cyberattacks in a major escalation of the Russo-Ukrainian War that began in 2014. Since the onset of the Russian attack, one-third of Ukrainians have been forced to flee their homes, making it the largest human displacement crisis today. The UN Refugee Agency estimates that over 7.1 million people remain displaced by the war, and 15.7 million require urgent humanitarian assistance. Despite Russia announcing that it would “reduce military activity” in late March 2022, Russia continues to ramp up its attack on Ukraine with bombardments across the country. More than one hundred days into Russia’s invasion of Ukraine, high civilian casualties are still being reported, and many cities and towns have been reduced to ruins. The UN Human Rights Office has further documented unlawful killings, enforced disappearances, torture, and conflict-related sexual violence. Humanitarian conditions worsen as civilians are unable to meet their basic needs, including food, water, and medicines.

The Ukrainian diaspora, which is growing at a rapid pace, has been an invaluable source of humanitarian assistance. In many ways, we have seen the Ukrainian diaspora expand on existing humanitarian relief efforts and global mobilisation strategies: social media advocacy and lobbying; gathering funds for humanitarian activities, relief, and medical supplies; and organising mass solidarity events reaching as far as Australia, Brazil, Canada, and the United States. In Europe, some Ukrainians have returned to fight the Russian army, others are collecting and sending funds and basic supplies, and many are providing logistical support and safe passage for civilians back home. Established Ukrainian organisations in Europe have rapidly diversified their activities to accommodate the needs of Ukrainians in Ukraine and the influx of Ukrainians in Europe. In the space of 4 months, a wide variety of initiatives has mushroomed, including supporting Ukraine-based freelancers on the Upwork platform, the Ukrainian business incubator, and the Jobs for Ukraine campaign bringing Ukrainian talent into contact with Belgian companies. The diversity and rapid expansion of initiatives shows the diaspora’s pioneering role in finding jobs for their newly displaced compatriots.

Diasporas continue to demonstrate their tenacity and resilience, and how their local knowledge, resources, and networks are instrumental to humanitarian response amid new developments in 2022. While the response patterns in each location often remain or recur, the diaspora communities involved all show a high level of adaptability to answer to changing circumstances. Indeed, as crises evolve, diasporas worldwide are forced to adapt to gridlocks and find alternative ways of supporting their countries of origin as well as responding to evolving needs.

Diaspora humanitarianism still faces key challenges such as the lack of funds, coordination, and enabling environments. The cases of Nicaragua and Lebanon, in particular, show how impeding diaspora contributions in countries reliant on remittances comes at a hefty cost. As global humanitarian conditions worsen, with 274 million in need of humanitarian assistance in 2022, one thing is clear: all actors within the humanitarian-development nexus must work together, including diasporas, to enhance the impact of aid in times of crisis.

Finally, it is important not to forget that crises do not only impact nationals but also diaspora groups settled in a particular country. Ukraine has brought this issue to light more than any other current crisis we have studied. The African diaspora based in Ukraine faced important challenges when the attacks started. Despite desperately trying to leave Ukraine, African students were prevented from doing so based on skin colour. In response, the African diaspora raised funds and mobilised on social media to evacuate Black students trapped in Ukraine and created humanitarian organisations to support these activities, such as BW4BL (Black Women for Black Lives) and Diaspora Relief.

“Diaspora engagement in times of crisis” is an EUDiF research publication, authored by Shabaka, published in June 2021. It provides a wealth of information from six country case studies and connects the dots between them. For more, read the full report or the abridged version.

Coming soon: With the TRAFIG project coming to an end, Caitlin Katsiaficas will share her insights into the role diaspora can play in expanding solutions to global displacement in a blog post that will take the discussion forward on the potential of the diaspora to ramp up support in crisis settings.

Related news
News
Research launch: Diaspora engagement in times of crisis, 2 June
Join us on 2 June to discuss the findings of our research on diaspora engagement in times of crisis.
Read more
News
WHD: Diaspora humanitarians in the race against climate crisis
As World Humanitarian Day, 19 August 2021, focuses on bringing together partners from across the humanitarian system to combat climate...
Read more