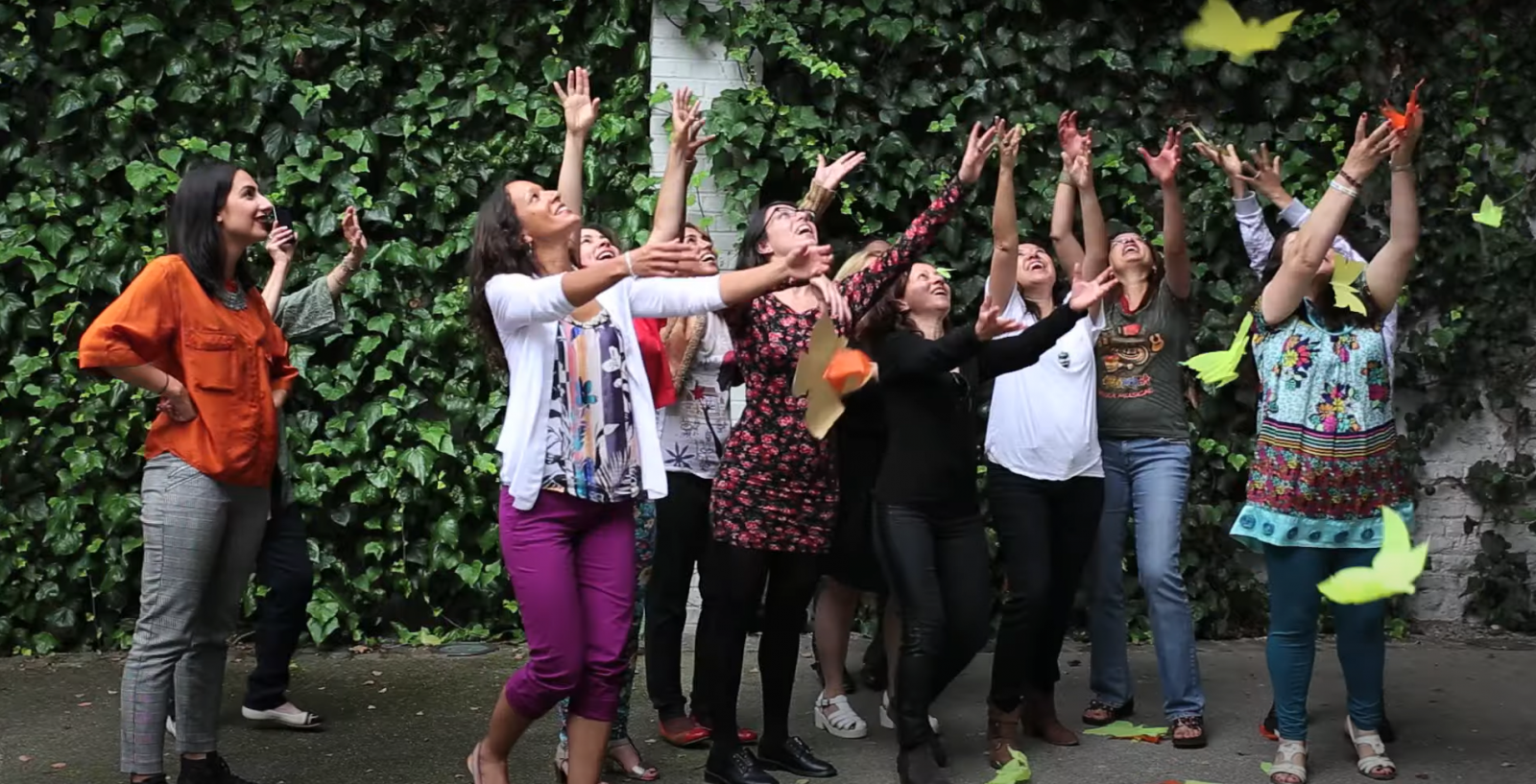 To celebrate International Women’s Day, recognising the vital role of women and girls in society, we spoke to Helga Flamtermesky, Coordinator of Mujer Diáspora, about the organisation’s work on the role of women in peace processes and collective memory and healing post-crisis.

Also known as Diaspora Woman, Mujer Diáspora is a Colombian diaspora network in Europe, based between Brussels, Barcelona, London and Stockholm. It was formerly known as the Truth, memory and reconciliation commission of Colombian women in the diaspora.

Hello Helga. Thank you for taking time to talk to us about Mujer Diáspora for International Women’s Day. This year, the theme is ‘Women in leadership: achieving an equal future in a Covid-19 world’. Your work with Mujer Diaspora centres on empowering women in order to influence social, political and cultural processes of change. How has the ongoing global pandemic affected this work?

Mujer Diáspora works with immigrant women refugees or exiles who share the desire to build peace and to have an impact as agents of change in the countries they live in. Their mental health during COVID is very fragile because it reminds them of painful or traumatic events experienced in countries at war or in violent conflicts. It also affects them emotionally due to the precariousness into which many of them have fallen.  Those who are beginning their migratory or refugee processes have to develop different skills to adapt in the midst of a complex situation of labour, economic and bureaucratic uncertainty. Anxieties revolve around the fears unleashed by the reflection on or proximity to death and precariousness.

Women’s voices in peace processes are fundamental because they have been the main victims of wars. At the same time, they have been the ones responsible for most of the micro peace processes in their families, communities and at the national level, influencing peace processes so that the victims are visible. In Mujer Diáspora, we start from the reality that in general the role of women in history or national histories is under-recognised. That is why we believe that recognising and amplifying the voice and the truth of women is fundamental to rebuild peace in which they are narrated.

Indeed, between 2015 and 2020 we have worked on the reconstruction of historical memory and truth as part of a healing and reconciliation process, specifically with Colombian women living in Europe. We hope that this experience will be replicated by women in diaspora from other countries suffering war or violent conflict.

Women bring multiple truths and in their silence there are narratives that show that women have not only been victims, but they have also built multiple forms of resilience. They should be treated as builders of peace because their decisions in the face of a violent event are generally not towards revenge, but towards the reconstruction of the family or societal fabric.

There is no defined role for women in the diaspora in terms of reconstructing memory, truth or peacebuilding, but we feel it is something that we have to build because in many countries it is believed that those who leave lose the right to participate and influence the country. Diaspora are recognised as economic actors who send remittances, but their rights to social and political participation are not recognised. We see that being an immigrant entails a loss of participation and influence in the country of origin and in the country of destination.

At Mujer Diáspora, we believe that we have to ensure that immigrant women can participate and have an impact in their country of origin and in the country where they live. We have to earn the role of peace builders in the country of origin and in the European country where we live because here in Europe we are still only recognised as immigrants or labour force, without recognising that in reality immigrant women are part of the private and political life of the country and of the whole of Europe.

What is the most important thing you have learnt during this endeavour?

It is not easy to build peace in the midst of the violence that arises when armed actors demobilise, and Colombia and its diaspora suffer from very recent wounds of war and peace. The greatest learning experience for us has been to bring to Colombia the voices of the victims (or those affected by the war) who today are immigrants or refugees. On a personal level, it is healing to tell one’s own truth and to add it to the truths of others. Breaking the silences and understanding why instances occurred creates new scenarios for dialogue.

At first, it was frowned upon for Colombian women abroad to want to participate or claim social or political spaces within the country, but little by little we have gained the right to be visible and recognised in the country. A great challenge has been to recognise that those who live outside the country also sustain peace within Colombia. But today we speak of the Colombian Diaspora, or Colombians in the diaspora and we are represented in various social, political and peace-building spaces.

From your experience, what are the key ingredients to make a collective recovery process effective?

Many things are necessary for a collective process to lead to the recovery of rights, healing or reconciliation. We created our own methodology called Active Memory, where we link psychosocial and feminist strategies to reconstruct historical memory and truth. I like that you ask about the key ingredients because our methodology works around food and cooking as a political space. We also carry out actions that activate the senses and the body so that what we talk about and listen to is not experienced as a traumatic memory, but rather we seek to imprint new emotions on that memory.

We also work on the spiritual side because we have learned that opening the memory and the analysis of what was experienced during war or migration awakens physical, spiritual and – in many cases – ancestral needs. I feel that remembering what we experienced in the country of origin implies an exercise of reconnection that is complicated by the distance, and that can generate physical and emotional exhaustion, which we try to avoid with our methodology. Another ingredient of our methodology is to make it easier for people to move in and out of different categories or roles.

What are Mujer Diáspora’s priorities for the next year?

Recognising ourselves as a diaspora has been important because it has allowed us to understand that we have a role in both our country of origin and in the country in which we live. Now we have the challenge of consolidating our role as peace builders. After having worked on the reconstruction of historical memory and the truth, we now want to strengthen this experience and turn it into tools for peacebuilding. We are going to create a school of intercultural mediation from which we can exchange and transfer knowledge with immigrant women from other diasporas in Europe and the United Kingdom. An initial objective in 2015 was to transform experience into knowledge and this is what we intend to do from 2021 onwards: to generate and publish useful knowledge for immigrants and for women in our countries of origin, and to offer training and support.

What, for you, is the most important thing to keep in mind for the year ahead?

Personally, I think there is a mental health scenario that needs to be addressed immediately with the different diasporas in Europe, especially with the refugee women who are arriving. I think it is important to develop creative and daring psychosocial processes to deal with the complex psychosocial experiences people have today. Migration in Europe is complex and often spoken about at macro level, meaning the multiple forms of violence that migrant women are experiencing risk being lost or rendered invisible. I am also concerned about the mental health of those who are managing these migratory flows, but I believe that in the case of immigrants it is much more serious because there is a loss of rights caused by the psychological impacts of what they have experienced in their country of origin and in the migratory process.

Read more about Colombia and diaspora engagement in the factsheet, available in English and Spanish.