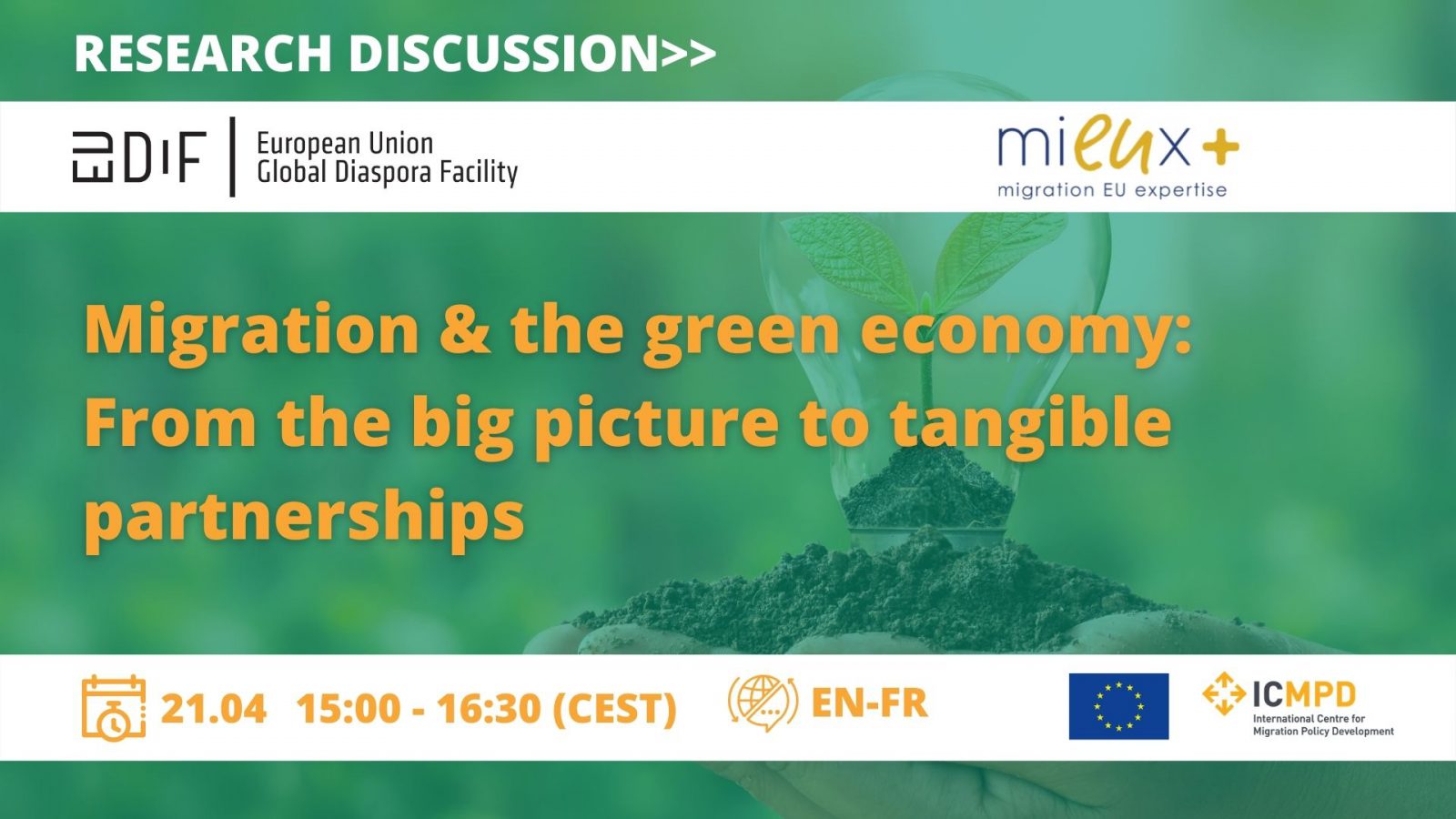 What are the links between the green transition and human mobility, and how can institutions and policymakers strengthen diaspora engagement in the green economy? On Thursday, 21 April, the European Union Global Diaspora Facility (EUDiF) and the Migration EU eXpertise Initiative (MIEUX+) co-hosted a webinar to present preliminary conclusions from the latest research in migration and the green economy.

The European Union has never been more committed to tackling climate change and creating a green, sustainable world. This commitment is visible in the growing emphasis on the green economy as a sustainable growth strategy, which refers to an economy that leads to “improved human well-being and social equity, whilst significantly reducing environmental risks and ecological scarcities.” Though this concept has been around for quite some time, the launch of the European Green Deal in 2019 put the green transition and climate resilience firmly at the top of the political agenda across Europe. The European Green Deal aims to transform the EU into a just and prosperous society with a climate-neutral and climate-resilient economy, while recognising that the EU cannot do this alone. As such, the Green Deal’s external dimension calls for partner countries to follow a similar sustainable growth trajectory and promote climate action through multilateral and bilateral cooperation.

Green growth, sustainable development and human mobility are intrinsically linked but under-explored. Kicking off our webinar on 21 April, Camilla Hagström, Deputy Head of Unit Migration and Forced Displacement at the European Union’s Directorate–General for International Partnerships, put it succinctly: “We have to become ‘better’ at connecting these issues.”  With this as the guiding challenge, EUDiF and MIEUX+ presented exploratory research results and led discussions around the increasing need for a multi-stakeholder and multi-sectoral response to sustainable development and the potential for migrants and diaspora members to drive and support the green transition in their countries of heritage.

Read on for our main takeaways from the event, then dig into the original research…

What is a green economy? The need for shared, contextual understanding

The concept of green economy is emerging alongside others such as sustainable development objectives and climate change. This can create confusion amongst some about the different concept and where they overlap and intersect. Moreover, understanding of the concept of green economy can vary according to the context. For example, landfilling of waste or the use of charcoal can be considered ‘green’ activities in countries where they improve on the existing conditions, whereas these same activities are not considered ‘green’ in Europe.

The role of context in green transitions needs to be acknowledged and understood. National governments and diaspora can both play a role in facilitating such understanding and adapting solutions according to context.

All parts of the global economy are intertwined and interdependent, meaning that transitioning to a truly global green economy cannot be driven by one actor (or region) in isolation. . Therefore, the EU’s external action must focus on advancing the green agenda in its partner countries through diplomacy, development support, policy coherence, and other forms of collaboration that create enabling frameworks. To this end, the green transition requires creative alliances with ‘non-traditional’ actors, such as labour migrants and the diaspora, which offer a unique potential to harness investments in green growth and skills development in Europe and countries of heritage.

As countries worldwide embrace the green economy, the sectoral impacts of this transformation cannot be understated. The sectors most affected include the energy, agricultural, and service sectors, all of which thrive on labour migration. But as new ‘green’ jobs demand increasingly more skilled workers, who will fill these roles?

The speakers highlighted a lack of ‘green skills’ as a significant threat to productivity and livelihoods. Therefore, the green transition requires a global commitment to skills development to increase the number of professionals for these new, ‘green’ jobs.

One way that the EU is addressing the general needs of the labour market in both EU and partner countries is through the Pilot Projects on Legal Migration. However, the discussions showcased an increased appetite for dedicated initiatives for the green transition. For example, the MOVE_GREEN initiative between Andalusia in Spain and Northern Morocco develops Moroccan talents in the renewable energy sector and fosters cross-border cooperation beyond the end of the project. The lessons drawn from existing actions suggest that the new Talent Partnership instrument could be the right avenue to address the skills demands of the green economy. In fact, one of the novelties of the Talent Partnership proposal remains that the diaspora is clearly identified as a key stakeholder for inclusion in its design and implementation.

Entrepreneurship is often seen as the first entry point when thinking of the role diaspora can play in the green economy in the country of heritage. One of our speakers, Placide Dougah, shared concrete examples of how Valora Solutions et Services Environnement supports potential entrepreneurs from the Togolese diaspora who want to set up businesses in green economy sectors in their homeland. For instance, Welcoming Diaspora mobilises and supports the diaspora in their investments by evaluating potential synergies to create, accompany, and finance entrepreneurs with strong local expertise. One such example was support to young Togolese in Bordeaux, providing green skills development to strengthen their project ideas and sustainability.

The diaspora can – and does – use its social and political capital to influence and mobilise key actors (public decision-makers, associations, business actors etc) in the countries of origin and residence for the good of the green transition. Diaspora influence is a complex and sometimes sensitive matter, but undeniably powerful and therefore a piece of the puzzle that should not be overlooked. This influence can impact at all levels and is seen in design of both policies and projects, with diaspora often in mediator or advocacy roles.

For more on the linkages between migration and the green economy, read MIEUX+’s full discussion paper or the abridged version. Read the executive summary of EUDiF’s latest research to learn about how the diaspora can contribute to the green economy.

To continue the discussion on the green economy, human capital, and diaspora engagement, join us at the second edition of the Future Forum on 11 & 12 May 2022!